The following are the basic skills in volleyball.

Some coaches would argue that the most important skill in volleyball is spiking.

You could say the object of the game is to get your team a good set to attack. If you have players at the net that are good at spiking, and you can get them a good set, then you'll do really well. 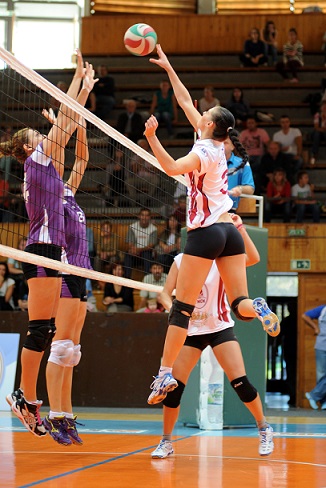 Score More Points by Mastering the Basic Skills in Volleyball

The three main ways to score points in volleyball are...

The following are the basic skills in volleyball for attacking.

Serving tough is very important. Many beginners make the mistake of just trying to serve the ball in the court.

Once you are able to consistently serve the ball over the net, start aiming your serves to different spots on the court.

The area of the court is divided up into 6 zones. Get good at serving to each of these zones of the court.

For serving a good float serve, you need to focus on contact the center of the ball. You want to contact the ball in way that creates a "knuckleball" movement.

I like to think of serving a floater as "pushing" the ball. Contact the ball with a flat vertical palm.

Contact is made more out in front of the body. This is different than a topspin serve where the contact is more above or behind the head.

Topspin serves are great to learn because this will help learning how to control the ball hitting and spiking.

If you're good at "clawing" then when you make contact, it will seem as though you're pulling the ball. The ball seems to be on your hand longer than when serving floaters.

The goal is to create topspin and have the ball drop down into the court.

Focus on contacting the ball more back behind the head with the hand in a clawlike hand position.

Passing is arguably the most important skill in volleyball.

If you can't pass, then you can't run an offense.

It's often said volleyball is a contest between the servers and the passers.

Tip: Often your team will come up against an opponent that is more talented and experienced. It just doesn't seem like your team has a chance. If this is the case, a good strategy would be to take chances with your serving. Serve aggressive and see if you can mess up your opponents offense. A lot of times tough serving is all you need to get your opponent playing poorly which results in your team gaining confidence. The underdog can often pull off an upset because of aggressive serving.

Basic skills in volleyball for passing involve "not swinging the arms".

Use the legs and shoulders when passing. There shouldn't be much arms swinging.

A common mistake beginners make is swinging the arms too much. Focus on "not swinging" and get in the habit of using good passing technique early on in your playing career.