1. Improves volleyball spiking power by focusing on the scapula

You've probably heard the expression, "It would be like trying to shoot a cannon out of a canoe."

To hit a volleyball really hard, you need to have a strong base.

The base for "shoulder joint strength" is the scapula stabilizers.

Many athletes make the mistake of focusing solely on improving strength of rotator cuff muscles.

Improving rotator cuff strength can help, but the base for shoulder joint function is the scapula.

A strong rotator cuff with weak scapula stabilizers is like trying to, "shoot a cannon from a canoe".


Exercises that work the scapula stabilizers might appear nonfunctional, but it's these areas that are critical to long-term health of the shoulder joint.

Some exercises to improve shoulder stability...

(In the above video, the Physioball Y Exercise)

(In the above video, the Physioball Push up Plus Exercise)

When you approach to hit a volleyball, it's important that you have the right muscles firing at the right times.

An energy leak occurs when all the energy to perform a certain movement doesn't go specifically into that movement.

Think of all the muscles and joints in your body working together as a "chain" of muscles and joints. The big picture goal is for the body to be trained as a single unit. You want the movement of your muscles to be efficient.


It's no coincidence that great leapers can bang the ball really hard. They have great ability to transfer energy from a powerful approach to a powerful spike.

During your workout, when you do 20 crunches, are you also doing 20 back extensions to counterbalance?

Many athletes make the mistake of going to the gym and only doing pushing type movements (bench press, overhead presses, etc). Be sure to include pulling movements such as rows and deadlifts to keep your training balanced.

A balanced strength program will help keep your movement efficient which has a big impact on how hard you can spike a volleyball. 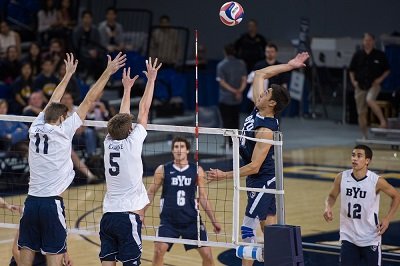 Here are my top 2 explosive exercises for volleyball hitting power...

The one hand overhead slam is basically the same except you perform a slower, more controlled movement. There isn't any jumping like the two hand slam. With the one hand slam, you just bring the medicine ball around and throw it into the ground. You've likely seen many volleyball players warm up by throwing volleyballs into the ground in the same manner.

Being a strong, powerful, efficient athlete is useless if you haven't developed skills for volleyball spiking.

To hit the ball hard, it's important to develop a good solid contact with the ball.

Hitting on a box (or elevated platform) is often overlook when it comes to learning to spike. Don't make the mistake of leaving this out of your spike training.

Hitting on a box drill...
Stand on a box at the net. Toss the ball to yourself and hit the ball down into the court. You should place targets on the ground and focus on hitting those targets.

What's really important here is to work on the contact with the ball.

Also focus on contacting the ball high with arm extended and hit the ball with topspin down into the court.

Important Tip: Get the elbow as straight up as possible before spiking. Elbow up and elbow to wrist contact. When you hit, it's elbow to wrist.

Once you develop a good elbow to wrist, this is when you'll likely start hitting with massive topspin and power.

Also, hitting on a box is great because it makes you focus on positioning.

Thousands of repetitions of hitting on a box will help you groove the same movement pattern. As you become more skilled at this, your movement pattern becomes more efficient.

The next step is to learn a spike approach. You don't want to start taking an approach and hit any volleyballs yet. First, focus on the right steps and upper body movement.

Good technique for approaching gets you in the best position for attacking the ball. The better your approach is, the harder you can potentially hit the ball.

After you have developed a consistent approach, use a spike trainer.

A volleyball spiking trainer is a device that basically holds the ball for you, ready to spike.

The spike trainer is great because it forces you to contact the ball higher.

Basically, the coach places the volleyball in the spike trainer and you then take an approach and spike the ball out of the device.

The advantage of using a spike trainer is you dont bend your elbow like you could when youre being set because the ball is at a fixed position.

You must reach as high as the ball is sitting or you wont be able to hit it.

Perhaps the the most important reason to use the spike trainer is the fact you dont have to anticipate the set or make an adjustment. Basically, you just focus on making a good approach and jump high hitting the ball hard. 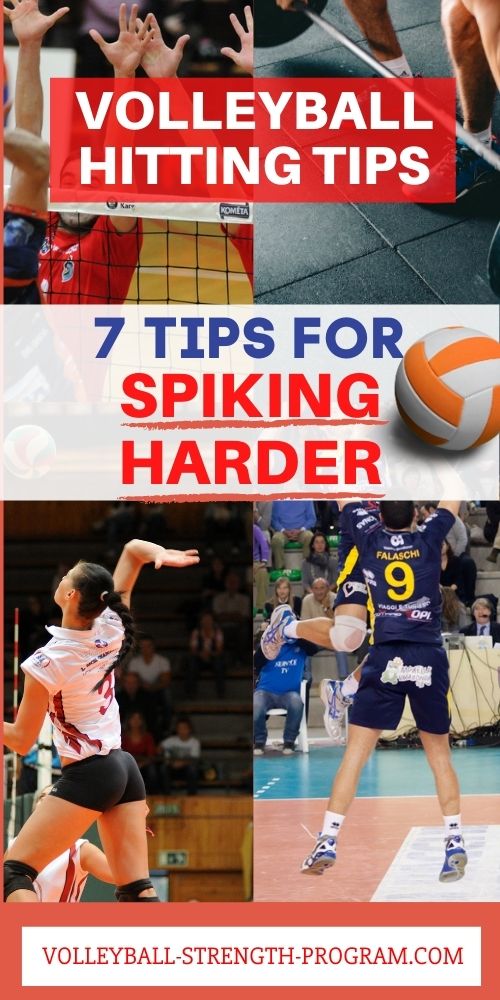 Obviously, since you'll be hitting off of a set in a game, this is what you'll need to practice.

If possible, work on hitting sets from a really consistent setter. The less adjustments you need to make when you approach, the better repetitions you'll have for hitting.
Consistent repetitions are important for improving movement efficiency.

Developing a consistent approach and armswing is key to developing hitting power. This is why many players often become more powerful hitters just by practicing spiking.

Lesson 5:
Volleyball Nutrition...What to eat and what not to eat to be successful at volleyball

Lesson 6:
Volleyball Injuries...Top causes and how to avoid them

Lesson 9:
4 Steps to a Better Low Back