I hope that you understand that you're just spitting in the wind if you think you can make significant gains in volleyball strength and explosive power WITHOUT backing-up your efforts in the gym with RECOVERY TECHNIQUES that help you recover from your training FAST.

Myth #2 is perhaps one of the *biggest* myths in athletic training in the modern era.

So let's clear the air on this one:

training with weights will likely make you slower and decrease your likelihood of increasing your volleyball speed and vertical jump in the future!

YES, it is true... and, YES, it's an absolute shocker to most people. But to really understand it, we really have to explain the history behind this.

There was a time, not too long ago, when many people thought that training with weights would make you slow.

Generally speaking, athletes seldom lifted weights, they were weaker and less muscular than the athletes of this era. 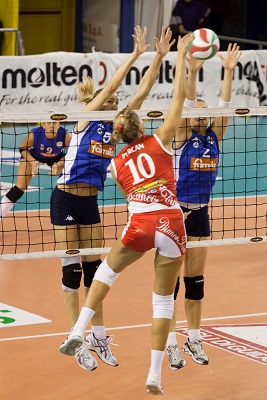 More recently, however, as athletes began to experiment with different weightlifting regimes, many began to see benefits of doing so. Hence, as time progressed, while lifting weights was once something that very few athletes did, it became something every serious athlete had to do to remain competitive -- the exception became the norm.

This is a classic example of an little-known practice becoming so effective that eventually everyone had to jump on board just to keep up. This is a general principle for life, as the human being attempts to evolve and progress - it is vital for you to have somewhat of an insightful view into the future and be able to reasonably foresee which of today's "exceptions" will become tomorrow's "norms".

When it happened that weightlifting became more mainstream in the sporting community, naturally, sporting people took advice from the people well-versed in the field of weight-lifting -- namely, powerlifters and/or bodybuilders.

IMPORTANT: It is these people that a vast, vast majority of weightlifting programs for sports come from and it is for this very simple reason that common weightlifting (yes, even the type advised for most volleyball strength programs) is actually inferior for the versatile, sports-oriented athlete -- especially those looking to increase volleyball specific strength, speed, vertical jump, and athletic power.

It's also important to note that there are very few people or trainers you will ever hear this from (in fact, this report is most likely the ONLY place) simply because a vast, vast majority of these trainers are only trained to teach in the fields related to powerlifting and bodybuilding.

Don't blame them, they're only regurgitating what their numb-minded teachers and fathers told them!

But, today, we've stepped into a world where simply lifting weights is no longer an advantage-- it's just a boring, old "norm".

But rest assured, there are better ways of training that can provide you with the all-important "exception".

I can assure you that there most certainly are superior forms of training:

==> Superior forms of and guidelines for plyometrics, based around the individual and their current abilities.

==> Superior forms of jump training,that far-and-away out do any "true plyometrics" and "sub-optimal plyometrics" programs

==> And even advanced and far-superior ways of incorporating certain types of weightlifting for volleyball, that are based solely on your personal performance level

So, what were the benefits of lifting weights awhile ago?

It's important we note these, for your understanding:

==> It was the "different" thing to do. It literally was yesterday's "exception" that has since become today's "norm". As for anything in life, once something becomes a "norm", it no longer provides an advantage; it simply becomes a *requirement* for staying afloat. Think about it like this, if everyone had a Ferrari, would they still be so cool?

This is important to understand, because it's not so much that weight-lifting itself was that great for increasing performance - it was the fact that the activity of weight-lifting played the role of the "exception".

-1-> As a volleyball player looking to be better than and ahead of your competition, you need to use your inspired vision to reasonably predict what will become the "norm" -- the standard -- for the future.

Better than that, you need to also learn to predict what will also be tomorrow's "exceptions" so you can get in ahead of time!

This just takes some creative imagery. You need to look back in time and compare that difference to the present day. 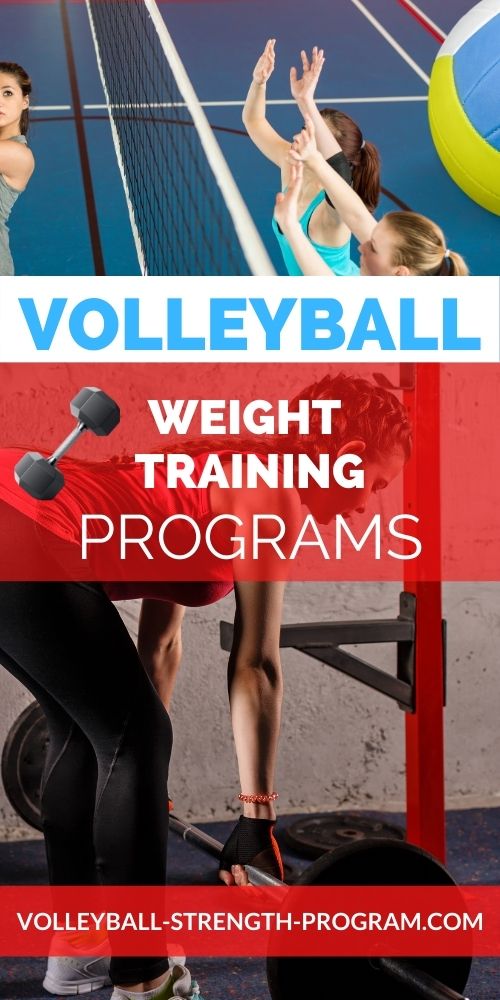 How many athletes that competed in the NBA in the 1940's could compete today? Similarly, how many sprinters who competed in the 1904 Olympics Games would have still won their medals at the 2008 Olympics?

In fact, probably none (No offense to the number of ex-Olympians that are reading this).

In just the past 10-15 years, we've seen the athleticism of volleyball players increase dramatically. Never before did we have any players like Phil Dalhausser or Kerri Walsh having the kind of impact on the AVP like they are today.

The kinds of skills that tomorrow's player is going to need are going to have to be even better than today's! And that's already a big task... but that's what every generation says!

It goes beyond just physical training, it also incorporates skills training, and especially mental, nutritional, and dietary regimes. These are the fields that provide a clear exception in today's athletic world. Anyone who gets ahead in these will clearly do well in the sport of their choice.

The major point of understanding is that training for above-average -- and incredible ;) -- volleyball specific strength and speed is not something uncommon today. It's actually becoming the "norm". So you'd better get in quick.

In just ten years, it's quite possible you won't see a women's player competing at the Division I level that doesn't have at least a 28 inch vertical leap. Especially girls between 5'7" and 6'0" are probably going to need at least 33 inch verticals...MINIMUM!

So where does that leave you?

The same can be said for all sports and athletic endeavors - the vertical leap is the king of all athletic measure because it measures the athletes power directly in opposition to gravity. The 40 yard dash or 100m sprint measures it horizontally and, hence, the degree of gravity weighing the athlete down is less.

We're going to see a time that will come very soon, where all athletes -- not just vollleyballers, but basketballers, wrestlers, sprinters, footballers, baseballers, high-jumpers, yes and even swimmers -- will perform strength and power programs because they will provide that extra boost that could make the difference between a gold medal and just qualifying to compete!

Imagine a swimmer that could propel an extra foot from the wall at the start of the backstroke or a baseballer that could get to first-base a step faster and consistently return more runs for the team?

The possibilities are endless and they all come squarely from the most effective methods of training for all-out versatile athletic power.

Until next installment, good luck with your volleyball training and try to develop that insightful ability to see what will be required by tomorrows standard.

You'll quickly see that learning the most cutting-edge volleyball strength training exercises and systems will become something that the volleyball players of tomorrow -- athletes just like YOU -- will simply have to participate in.

My advice: get in early and get your shine while you can.