The first referee is the official on the referee stand. Of the volleyball officials, this is the referee that's in charge of the match.

The first referee is also referred to as the R1. R1 is the head official of the match. The R1 has final say on all calls.

Think of the R1 as the facilitator. The R1 facilitates the match.

The R1 is the most important of volleyball officials and has various duties. 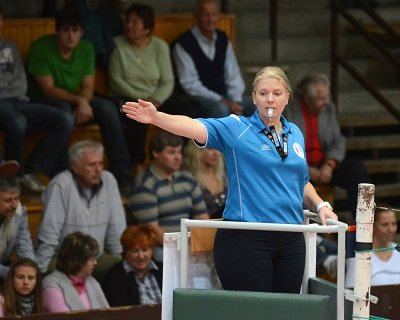 The second referee is the down referee. Also referred to as the R2.

The R2 has specific duties.

The scorekeeper keeps track of the match on paper. The scorekeeper is responsible for such things as filling out the pre-match heading information, recording subs, points, and timeouts.

The line judges are responsible for assisting the volleyball officials with calls.