Volleyball passing is important for running a success offense.

The two types of passes are the forearm pass and the overhead pass. When it comes to passing, forearm passing is the main technique used in volleyball.

The forearm pass is the act of controlling the ball in such a way that it's directed to the setter. The setter needs an accurate pass in order to set an attacker.

When preparing to make a forearm pass, the player first moves to intercept the ball. 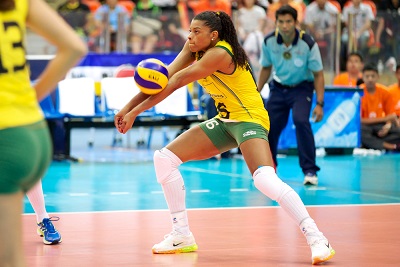 The following are important cues for the ready position...

Passing the ball inline means the passer tries to get directly behind the ball. The player tries to stay between the ball and the target.

This will involve moving sideways if the ball is coming to the players side.

The inline technique is used mainly for easy balls.

Offline passing is the technique used for playing balls to the side of the body.

When passing offline, the player lowers the front shoulder to help angle the ball to the target.

Offline passing is mainly used for balls traveling deep into the court.

It's important to note that a ball hit directly at a player can be taken offline.

Passing offline has an advantage over overhead passing in that when a player is skilled at taking balls offline, any deep ball can be played offline and overhead passing with the hands isn't necessary.

Overhead passing has become a popular way of passing the ball to the setter.

Overhead passing has both advantages and disadvantages.

Often players that haven't developed good forearm passing skills will rely more on overhead passing. So it's usually best to focus on learning to forearm pass in the beginning. Save the overhead volleyball passing skill for easy free balls.